The Americans for the Arts Half-Century Summit is going on in Baltimore this weekend.  The Summit  celebrates  the arts during the past 50 years and explores the opportunities the next 50 years will bring. Famous film maker, John Waters, and iconic movie star, Robert Redford, are among the stars showing their support for the arts in education and throughout the community. 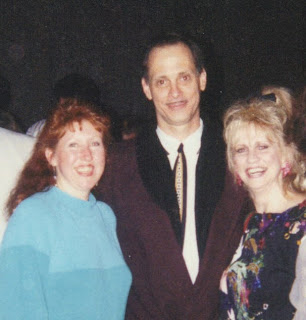 I dont have any photos of me with Robert Redford -- but .....    A few years ago I went to a Buddy Deane reunion dance where John Waters was a guest.   This picture of me, John, and Evanne Robinson was taken that night.   He and Evanne had known each other since high school days when she was a very popular member of the 'committe'.  For those of you who may not know, The Buddy Deane Show was the local equivalent of 'American Bandstand' and teenagers all over Baltimore rushed home to catch the show and keep up with their favorite dances and their favorite dancers.  Evanne was definitely one of the favorites.   John Waters once said in an interview that she was his inspiration for one of the main characters in Hairspray.    John Waters never appeared on the show, but he did feature Buddy Deane in a cameo in the Hairspray film.
Posted by Brenda at 5:57 PM